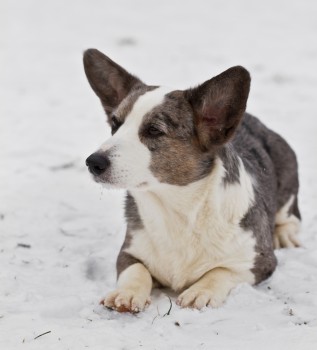 There are 26 breeds and varieties in this group, and 318 dogs competed today at the Piers. The best of each breed got to come downtown to the Garden to compete for the group title.

The Australian Shepherd I picked to win it all needs to win this group to advance to the Best in Show competition. Fingers crossed!

Come back tomorrow for the Terriers, Sporting dogs, and and Working dogs. I’ll post the first breed results no later than 1 pm (probably earlier). The evening session will begin at 8 pm, with the breed winners in these groups competing for Best in Group and culminating with the Best in Show announcement closer to 11:00 pm.

In the meantime, go to WKCBuzz.com to join in with live discussions on all that is Westminster from social media. If you’re interested in seeing the breed judging, download the Westminster 2014 app on your phone or tablet, or check out the videos posted on the main Westminster site. The breed judging is not narrated – the only audio you will really hear will be crowd noise and some barking.