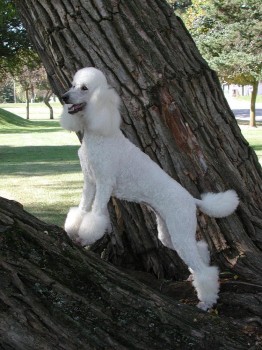 A total of 307 dogs started out the day, representing 19 different breeds and varieties. (The Norwegian Lundehund did not have any entries this year.) The dog of each breed that best exemplifies the breed standard is here tonight before Judge Jacqueline Stacy of Chapel Hill, NC.

Although this isn’t typically a group near and dear to my heart, I did recently discover how cute the Keeshond is, and it’s rapidly working its way toward the top of my list of favorite breeds.

“Non-Sporting” means that the breeds don’t fit into any other group. Originally all dogs were designated either Sporting (meaning hunting dogs, which dominated the show) or Non-Sporting. After the Non-Sporting Group got too big, the Toys and Terriers were split off, then the Working dogs got their own group, which was split into Working and Herding when it got too big. (On the Sporting side, the Hounds were split off from the main group.) There has been some desire among AKC members to change the Non-Sporting name to “Companion dogs” to more accurately reflect the make-up of the group.

And the winners are:

Coming up: the last group for tonight, the Herding Group.