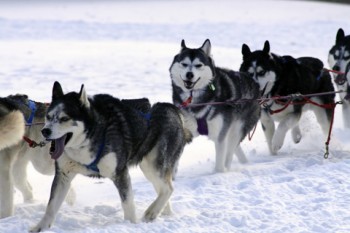 The majority of the top five are headed for the Iditarod checkpoint, trying to catch up with leader Joar Leifseth Ulsom, who checked in there at 8:28 (Alaska time) last night. He is apparently taking one of his rest breaks, as he spent the night there with all 16 of his dogs. Ulsom’s next objective after he leaves Iditarod is Shageluk, 55 miles away. His average speed has been 5.13 mph.

Lars Monsen left Ophir, headed toward Iditarod, at 2:05 yesterday afternoon with 15 dogs and an average speed of 7.8 mph. It took Ulsom about 15 hours to travel from Ophir to Iditarod, so Monsen should be arriving there soon.

Larry Daugherty is running third and left Ophir for the 80-mile trek to Iditarod at 5:57 Wednesday evening with 15 dogs and an average speed of 5.7 mph.

Rounding out the top five, Mitch Seavey left Ophir at 2:12 this morning with 13 dogs and an average speed of 9.14 mph. Seavey is the only one of the top five to have taken his 24-hour rest period.