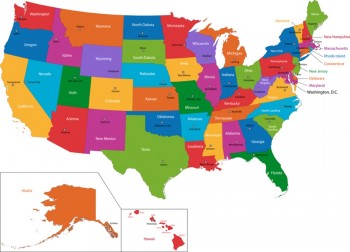 It’s a travesty! Only 11 of our 50 states have adopted a breed as the “official” dog of their state. I mean, all 50 states have an official bird. A bird, for crying out loud? And not a dog? See if your state made the list:

Alaska: The Malamute. No surprise there. In probably the only state where mushing is a major sport, this quintessential sled dog is held in high esteem, named as the official state dog in 2010.

Louisiana: The land of the bayou named the Catahoula Leopard Dog as its official dog in 1979.

Maryland: This small-ish state named a big breed, the Chesapeake Bay Retriever, in 1964, the first state to designate an official dog.

Massachusetts: No big surprise here, the Boston Terrier has been the official dog of the Bay State since 1979.

New Hampshire: Now this one surprised me. The Chinook, which is a rare breed of sled dog, was named the official dog of the Granite State in 2009. I didn’t know mushing was big in New Hampshire.

North Carolina: Tar Heels recognized a dog native to their state, the Plott Hound, in 1989.

Pennsylvania: The Keystone State named the Great Dane as their state dog in 1965. There’s no obvious connection to the state that I know of. Maybe they just like Scooby Doo?

Texas: The Lone Star state went out on a limb in 2005, naming the Blue Lacy as the state dog. Always the rebels, Texans chose a dog that isn’t recognized by the AKC.

Virginia: The American Foxhound, one of the first breeds developed in America, was recognized as the state dog of Virginia in 1966.

Wisconsin: The American Water Spaniel was recognized as the state dog in 1985. Wonder how this breed gets along with badgers?

Things that make you go hmmmmm…

Did you think the Bulldog was the state dog of Georgia? Since it is the beloved symbol of the University of Georgia, you might imagine the state would have adopted it. However, state legislators wanted to name the Golden Retriever as the state dog in 1991, but could not pass the measure because Bulldog fans wouldn’t allow it. Now they are left with no state dog at all.

Similarly, Kansas tried to name the Cairn Terrier (i.e. Toto) as the state dog in 2006, but the legislature never passed the bill, and it was tabled in 2012.

In 2004, the Washington state legislature proposed the Siberian Husky as its state dog, but the measure fell through.

Most recently, a bill was introduced naming the Labrador Retriever the state dog of Ohio in March, 2018. The measure has not yet come up for a vote.

Colorado, one of the most dog-friendly states in the nation, named shelter dogs as their state dog, following a suggestion made by schoolchildren learning about how bills become laws.

If your state didn’t make the list, contact your state legislators and find out how to get such a measure on the legislative docket. (Or dog-et?)