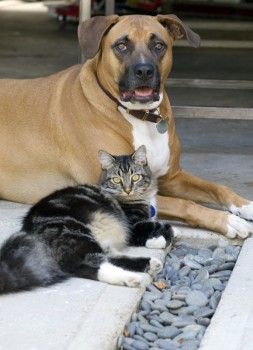 From Greenacres, FL:  When Linda Urioste’s Labrador was picked up by animal control officers, she thought she had lost the dog forever.  After a few days, the dog was adopted by another couple.  Upon learning that Ms. Urioste was looking for the dog, the couple thought about giving him back, until Ms. Urioste yelled at them and threatened to sue.

After awhile, the couple who had the dog realized that their cat was missing.  Ms. Urioste called and left them a message that they would only get their cat back when she got her dog back.

Needless to say, now Ms. Urioste is in the pokey, charged with theft and extortion.  No word yet as to who has the animals