What is Normal Puppy Development?

Most of us know that when puppies are born, they have their eyes closed and they donÆt know where to go to the bathroom, but do you know anything else about how they grow and develop?Ā If you donÆt know what normal development is, itÆs hard to tell when something is wrong. 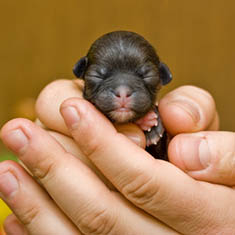 Once the puppy has been cleaned, he or she will generally find a way to the mamaÆs teats and start nursing.

After about 8 weeks in the womb, a puppy comes into the world inside an amniotic sac.Ā The mother begins licking the puppy to break the sac and to stimulate the puppy to start breathing.Ā Inside the womb, the puppyÆs lungs didnÆt have to work because oxygen from the motherÆs bloodstream provided oxygen to all of the puppyÆs body systems.Ā However, as soon as the umbilical cord is cut, the puppy no longer has access to the mama dogÆs cardiopulmonary system and must begin breathing on his or her own.

Once the puppy has been cleaned, he or she will generally find a way to the mamaÆs teats and start nursing.Ā No one knows exactly how puppies find their way because until about 10 ¢ 14 days of age, they cannot smell, hear, or see.Ā It is possible to tell which puppies are going to have alpha personalities by watching where they feed.Ā The teats in the center of the mamaÆs belly are generally considered prime real estate, and thatÆs where the alpha puppies will head.Ā Less dominant puppies will get the teats at the top and bottom of the abdomen, while truly meek puppies will usually have to wait until the others are done eating.

It takes about 3 weeks before a puppy will make much sound other than a whimper.Ā Any loud cries should be immediately investigated because they likely mean the puppy is in distress.Ā In large litters, some of the smaller puppies may not be getting enough feeding time because they are shoved aside by their larger brothers and sisters.Ā Bigger puppies may also inadvertently hurt the smaller ones when they are playing, or the mama dog may sit down or roll over on a small puppy.Ā So if you hear your puppy crying, you need to go check on him right away.

Between two and four weeks of age, puppies begin to open their eyes, crawl around, bark, and wag their tails.Ā They start realizing they have brothers and sisters, as well as a mama (a distinct creature, not just a source of nutrition).Ā Their baby teeth begin to come in, and they are generally started on solid food at this time, although they will still nurse from their mother, too. 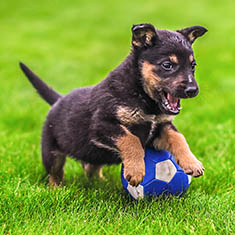 From four to twelve weeks, puppies start to learn socialization.

From four to twelve weeks, puppies start to learn socialization.Ā The puppies will begin to play with their littermates and learn how to ōplay biteö.Ā They use these little nips to warn each other when play is getting too rough, but the bites are not intended to inflict pain.

Puppies can begin potty training at about five to eight weeks, and their mama may be their best teacher.Ā Let them follow mama outdoors as often as possible, and they may begin to get some idea of what is expected of them.Ā You can also confine them to a smallish area because they wonÆt want to mess up their sleeping area.Ā If you keep them in a small area, then let them out frequently to relieve themselves, it will also help them to get the idea.

By eight weeks, puppies are usually fully weaned and can be sent to their forever homes.

By about twelve weeks, your dog should have been vaccinated against most easily-transmissable infection diseases and is ready to begin playing with other dogs.Ā Socialization to other dogs is important because it can prevent your dog from being overly aggressive or overly fearful later in life.Ā You should also socialize your dog to other household pets, including your children.

From four to six months, your dogÆs primary job is to grow.Ā It may seem that they add inches and pounds literally overnight.Ā Although your new puppy will be very energetic, you will want to keep an eye on him or her to prevent rough play from injuring growing tissue.Ā Joints are especially prone to injury, so you should try to keep your dog from jumping off anything too high up.

During this time period, your dog will also begin to try to figure out the social structure at your home.Ā It is vital that you show the dog that you are the alpha member of the household and the he or she belongs well down the social ladder.Ā Some things you will use to establish this pecking order include basic obedience training, and teaching your dog to do things only when you have given permission.Ā For example, make the dog sit and stay before you put the food dish down.Ā Allow the dog to get on couches and beds only after he or she has been invited.Ā Feed the dog after the rest of the family has eaten.Ā You must reinforce the fact that you are above the dog at every opportunity during these formative months, or you may struggle for supremacy for the remainder of the dogÆs life.Ā That may sound heartless and cold, but if your dog doesnÆt understand that he or she must be subservient to you, it can cause major behavior problems later on. 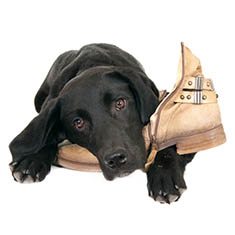 Your dog is now big enough to cause real damage to your home.

From six to twelve months, your dog is going through his or her adolescent phase.Ā Just as with human teenagers, this can be a difficult time to be a parent.Ā Your dog is now big enough to cause real damage to your home or your children (particularly if you have a large breed), yet young enough not to understand that rowdy play might not always be appropriate.

Somewhere between one and two years old, your dog will reach social maturity and begin to settle down.Ā For some dogs this maturity isnÆt attained until as old as three years, but it will come eventually ¢ donÆt lose heart!Ā Just keep working with your dog until he or she learns you are the boss and in charge of all the good things in life.

One of the biggest reasons why dogs are abandoned to shelters is because the dog doesnÆt match the ownerÆs expectations.Ā Spend some time thinking about what you want out of a dog, and research the various breeds to match your lifestyle and expectations to the breedÆs expected temperament.Ā Realize that your puppy will take a long time to mature, so be patient and continue with socialization and training to get the dog you desire.

HEALTH Summer is coming on fast, so itŌĆÖs time to plan how you will keep your dog safe and healthy through the lazy, carefree, warm days.

DOG FUN Walking your dog is not only crucial to keeping him healthy and happy, it strengthens the bond between your canine friend and his caregiver. There are a lot of obstacles out there. DonŌĆÖt forget these simple tips to keep your walk fun and safe in the outside world.

HEALTH The same techniques that physiotherapists use to treat a variety of injuries and conditions in humans have been adapted to suit animals with great success. Family pets, show dogs, and working dogs can all benefit greatly from physiotherapy.┬Ā Dogs whose activities involve a lot of agility are especially susceptible to the types of problems that physiotherapy can address.

FIRST TIME OWNERSBringing a dog into your family is a decision where many people donŌĆÖt realize itŌĆÖs magnitude until after they have the dog. There are a number of things that you need to research before you decide to purchase a dog, and it starts right in your own home.

HEALTH Many believe that a dog and a new baby cannot happily coexist, so therefore the dog has to go.┬Ā This is not necessarily the case. ┬ĀA new baby does not mean you have to abandon your dog.

Your DogŌĆÖs Digestive System
PHYSIOLOGYEver wonder why your dog eats so fast? Or why he eats gross things? Or why he gets sick to his stomach? Or why his waste stinks so bad? Some of these things are normal, some are not.

Top Ten Tips for Living with a Senior Dog
DOG HEALTH Bringing home a new puppy is so exciting, but it doesnŌĆÖt take all that long for your exuberant puppy to grow into a senior dog who may have special needs. Here are the doggies.com top ten tips for taking care of your companion who has been with you through so much.