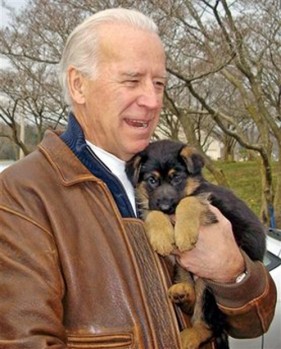 No, President-elect Obama has not yet made good on his campaign promise to his family, but Senator Biden has!

It made much less of a media splash than Obama’s dog search, but apparently Biden promised his wife they would get a new puppy when the campaign was over.  They have recently welcomed a 3-month old German Shepherd puppy into their family.  Apparently, they have had several Shepherds prior to this and absolutely love the breed.  And who wouldn’t love the little breed of fluff (see picture above – he’s adorable!)

However, because they purchased the dog from a breeder close to their Scranton home, many animal rights activists object to the decision, stating they should have adopted a shelter dog instead.

While I personally respect the rights of people, even those in the public eye, to choose their own pets from wherever they choose, I have to say that using the words “Pennsylvania” and “breeder” in the same sentence makes me a little nervous.  We have previously pointed out that Pennsylvania is known as being the puppy mill capital of the US.

No one has pointed definitively to the Biden’s chosen breeder as one which treats its puppies cruelly, but state agriculture officials cited the Wolf Den Kennel in Chester County on Dec. 10 for a general record-keeping violation and failure to produce records of rabies vaccinations.

Biden spokeswoman Elizabeth Alexander says at the time Biden bought the puppy, the kennel had a 100 percent rating on its last five inspection reports.

Brown says she has never been cited before.

BTW, if you want to get in our survey to name the Obamas’ puppy, make sure you hurry!  The survey will close on January 1st, at which time we’ll pick the top five suggestions and turn it into a poll to obtain the final result.