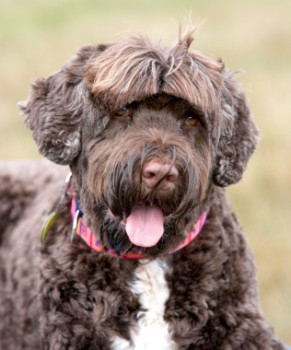 The editorial cartoon in my newspaper today showed a couple going to a movie theater.  The poster outside, showing coming attractions was for a movie called “101 Portuguese Water Dogs”, and the lady says to her husband, “I knew this was coming!”

This reflects the concern some of you have posted in our forum - will Portuguese Water Dogs become the next “in” thing?  Although this originally sounds like a harmless phenomenon, you have to think beyond people buying the dogs to when people become sick of the dogs.  This breed is not for everyone!  Keep in mind that the Obamas have lots of household help, which most of us don’t.  This dog does not look like it is easy to groom, and it is a fairly large breed.

Even though PWD puppies are cute as a button, then eventually grow up.  An eventually is a relative term – these dogs have a very long puppyhood, sometimes lasting until they are 4 years old.  New dog guardians who are not used to a puppy’s exuberance are not likely to put up with the chewing, rowdy play, and all the other hassles that go with a new puppy for four long years.

So, then what happens?  Shelters become overrun with dogs whose purchasers didn’t know what to expect.  This was a well-documented occurence after the release of Disney’s 101 Dalmations movies.  Everyone thought the spotted puppies were so cute, but they didn’t know that many Dalmations are deaf, or that the dogs can be high-strung.  The dogs became unwanted, and were dropped off in droves at shelters across the country.

One thought on “Too many Portuguese Water Dogs!”