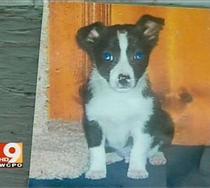 OK, when you read the headline you’re thinking it’s a Rott, a Pit, or some other big strong dog, right?  Nope, it was a 5-pound Chihuahua mix! Here’s the story from WCPO, a local TV station in Cincinnati.

A Blue Ash family is outraged after returning home to find their dog had been shot and killed by a police officer.

The dog was a Chihuahua-mix named “Jack” that Scott and Sharon Bullock had given to their 12-year-old son for his birthday a few years ago, NewsChannel5 partner WCPO-TV reported.

When the Bullocks returned home from a family member’s funeral on Friday, they found blood and three bullets on their front porch, along with a note to call the Blue Ash Police Department about their dog.

The Bullocks were shocked to learn that Jack had gotten out of the back yard and two officers who tried to catch him ended up shooting and killing him right on the family’s front porch.

“He was cornered on the porch and scared,” said Sharon Bullock. “The officer bent down bare-handed to pick up Jack, and Jack bit him.”

“My 5-year-old cried himself to sleep the night before last, wanting his dog,” said Sharon Bullock.

“He ‘barks’ for him,” added Scott Bullock. “He’d ‘bark’ and Jack would always come to him, so he’s outside going ‘Bark bark bark,’ hoping he’s gonna come back. It’s heartbreaking.”

The Bullocks told their 5-year-old and 3-year-old sons that Jack ran away.

The Bullocks admit they were at fault for leaving their dog outside, and are sorry the officer was bitten, but they said their dog was not a vicious animal and had never bitten anyone before.

They’re wondering why the officers didn’t call the SPCA to catch the dog.

“They didn’t make that phone call other than to come scoop the dog off the porch after they shot him,” said Scott Bullock. “Two grown men that can’t gather up a 5-pound dog –- and they’re trained police officers –- sounds ridiculous to me.”

That officer later explained to the family that he was following procedure.

The Blue Ash Police Department has not returned calls for comment on the incident.

The family said there were two officers involved. One was bitten. The other officer shocked the dog with a Taser gun and then shot him three times.