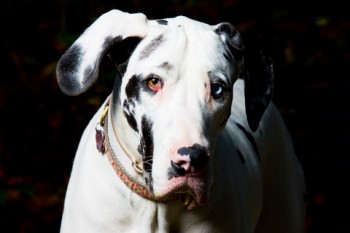 Gibson, the world’s tallest dog, has died from cancer at the age of 7. After being diagnosed with bone cancer last April, Gibson had his right front leg removed, but it was too late to prevent the cancer from spreading to his lungs and spine. When he began having trouble with his back legs, Sandy Hall had to make the difficult decision to put him down.

Gibson had worked as a therapy dog, and Ms. Hall has established a Web site in his memory to promote Three Paws for the Cause, to raise awareness of canine cancer.

Gibson’s world record height?  42.6 inches at the whithers, and (get this!)  7 feet, 1 inch tall when standing stretched out on his hind legs.  You guessed it – he’s a Great Dane!

5 thoughts on “Death of the World’s Tallest Dog”