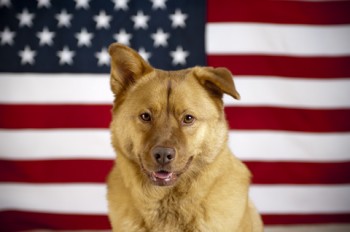 Many people say the economy is the most pressing problem facing the country today, but Al Franken took the time to introduce a bill in Congress to help our country’s veterans heal from their war wounds by matching them with service dogs.

The VA is going to be receiving about $5 million in funding under the Service Dogs for Veterans Act to provide about 200 dogs to veterans, half with mental disabilities and half with physical challenges (the vets, not the dogs).  Part of the money will also go to a VA study of the impact dogs have on veterans’ lives such as whether they reduce the cost of hospital stays and whether they help to prevent suicides.

The bill was originally floated as Senate Bill 1495, but was passed as part of the defense appropriations bill for 2010.

One of the veterans whoattended President Obama’s swearing in ceremony told Franken he couldn’t have come to the Inauguration without his service dog.  That got Franken to thinking about what an impact service dogs could have on a wide variety of veterans who were hurt in Iraq and Afghanistan.

In Franken’s home state, an organization named Hearing and Service Dogs of Minnesota will be working to train dogs for this program.  Al Peters, the founder of the charity, states that it takes at least $25,000 to train a service dog, making the placement of a dog with most vets cost-prohibitive.  Under this new program, organizations like this one would receive the funding they require to increase their capacity to train and place dogs.

Kudos to Senator Franken for combining two worthy causes and finding a way to help vets and help dogs at the same time!