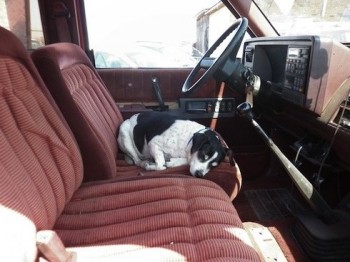 When Wiggles’ master was ill and lying on his deathbed, the dog would not leave his side. The man’s son says they had to carry Wiggles outside occasionally to go to the bathroom, but other than that the dog stayed with his best friend until the man passed last June.

How is Wiggles spending his days now? He sleeps in the driver’s seat of the man’s tow truck. The truck is in use at an impound lot, where it is used to move cars around the lot. The son posted this photo on Reddit, where he notes, “Whenever someone is in the truck he gets in and goes for a ride around the yard. If no one is in the truck he will go to the drivers door and bark until someone lets him in. We have to pick him up and carry him out of it when its time to go home.”

One thought on “Wiggles the Dog Remains Loyal to Deceased Owner”