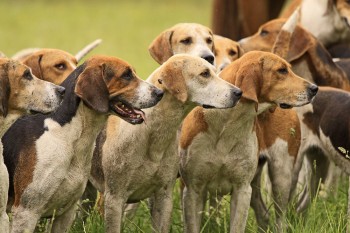 Usually, we feature the first ten of something, but I thought it might be fun to look at the other end of the list today. Here are the 10 breeds that were registered in the LOWEST number with the AKC in 2013.

10. Coming in at number 168 on the AKC’s list is the Dandie Dinmont Terrier. This small Scottish terrier has a distinctive top knot haircut and can be either pepper or mustard colored. (Sounds like we ought to invite him to the barbecue!)
9. The Pyrenean Shepherd, a smallish herder from the Pyrenees Mountains in France and Spain.
8. Finnish Spitz. The National Dog of Finland is a small hunting dog used to find moose and elk.
7. The Finnish Lapphund is another Spitz-type dog, this one used to herd reindeer.
6. Otterhound, an old British breed used to hunt…wait for it…you guessed it…otter! This is a very rare breed, with fewer than 1,000 in existence worldwide.
5. The Harrier is a scent hound that looks like an over-sized Beagle. There are several of these “big Beagles” at the bottom of the list, which surprises me because Beagles are one of the most popular breeds.
4. Cesky Terrier: This dog puts you in mind of a Scottish Terrier, only with a much longer neck. The breed originated in Czechoslovakia.
3. The Norwegian Lundehund is a spitz-type hound from Norway, used to hunt puffins.
2. American Foxhound – Another of the “big Beagle” breeds.
1. English Foxhound: Although the least registered breed in the club, the English Foxhound is usually the biggest of the “big Beagles” In order of height, they go this way: 13″ Beagle, 15″ Beagle, Harrier (18 – 22″), American Foxhound (21 – 25″), and English Foxhound (24″).

And there you have it. Keep in mind, some people don’t register their dogs so there could be lots of these dogs in the US, even though only a relative few are registered with the American Kennel Club.