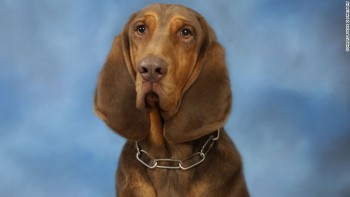 From the Facebook page of the Conyers, GA Police Department:
Conyers Police Mourn the Loss of Police K9 Zane

(Conyers, GA—July 17, 2015) The Conyers Police Department regretfully announces the loss of police K9, Zane, after he was found deceased in his handler’s patrol car Thursday evening, at approximately 5:00 p.m., at the handler’s residence in Rockdale County, Georgia.

Zane, a five year old bloodhound, has worked as a tracking dog for Conyers Police Department for four years, three of those with his current handler.
Zane’s handler, Jerahmy Williams, has been with the police department nearly five years and is a patrol Corporal. Williams is currently on administrative leave with pay pending the outcome of an internal investigation.
Rockdale County Sheriff’s Office responded to Corporal Williams’ residence last night and is currently conducting a separate investigation with the assistance of the Rockdale County District Attorney’s Office.
“We are committed to the care and proper treatment of our working K9s. We are mourning the loss of our own,” says Police Chief Gene Wilson.

While we offer our sympathies to the department, it’s only fair that we point out that the dog had been left in the handler’s car for TEN HOURS. I don’t have a weather report for Georgia from last week, but I am in Florida this week, and today’s high was 97 degrees!

How does a dog handler forget his dog is in the car? I just don’t understand how this could have happened! What a tragedy, and a totally unnecessary loss.

Rest in peace,Zane. Thank you for your service.