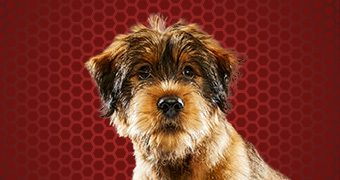 Despite Team Fluff bringing in a potential ringer in 28-pound Old English Sheepdog Gryffin in the middle of the fourth quarter, Team Ruff brought it home, winning 70 – 44 in the 12th annual Puppy Bowl.

This Animal Planet perennial favorite is designed to highlight the need for people to adopt dogs from shelters across the country.

Just as with the Super Bowl, I like the commercials better than the actual game. Subaru had their family of cute dogs in the car, and Bissell showcased their SpotBot carpet cleaner in a spot featuring the adopted dog of one of the Bissell family members. The game also featured the trailer from The Secret Life of Pets, due in theaters in July.

Viewers shared Instagram photos of their own adopted dogs throughout the game, using the hashtags #PuppyBowlSubaru and #Promo.

It looks as if a good time was had by all, and I’m sure a lot of dogs got adopted as a result of the awareness spread by the game.