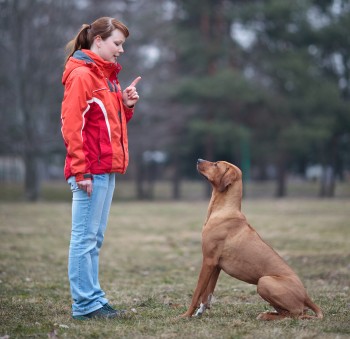 Just as the AKC added a Masters Agility Competition three years ago, they are now adding a Masters Obedience Competition to the festivities in New York City next week. The new event will be held at Pier 94 on Monday, February 15th, running concurrently with the daytime breed judging at Pier 92.

The AKC has sent invitations to the top 150 obedience competitors, based on Obedience Trial Championship (OTCH) points earned in 2015 through October 31st. The first 35 handlers to respond will be entered in the event. Importantly, this competition is not only open to pedigreed dogs. Mutt-i-grees qualify and compete on an equal basis with their purebred brothers and sisters.

The preliminary round consists of six skills:
Signal Exercises, during which handlers may use only their hand signals to direct their dog to sit, stay, or come.
Drop on Recall, where the dog must immediately stop and lie down when the handler cues him or her from a distance.
Directed Jumping involves sending the dog out into the center of the ring. The dog then sits and waits for the handler’s cue to jump over an obstacle.
Retrieve over High Jump is just what it sounds like, the dog must retrieve an object and jump over a hurdle in the process.
Scent Discrimination asks the dog to identify a certain scent from among many scents.
The Group Sit Stay Exercise places all the dogs in a sit-stay, then the handlers walk around them, almost as if they are playing musical chairs. When the handlers return to their dogs, who are hopefully still sitting in the same spot, the exercise is over.

The top 10 dogs from the preliminary competition advance to the finals where each dog and handler team is given 6 minutes to perform a free-style routine. The required elements are heeling during a walk, jumping, retrieving, and going out away from the handler. They must also perform two of the three electives: exercises, tricks, and or dance moves.

The final score is compiled by combining the preliminary score with the final round score. Scores are based on teamwork between the handler and dog, the dog’s willingness and apparent enjoyment, creativity, and tactical execution including accuracy, flow, and smoothness.

If these skills sound advanced, they are! Keep in mind, these dogs have already reached a masters level in obedience. If you’re looking to get started in this event, you can start with basic obedience classes to help your dog learn the basic commands. The AKC offers a primer, as well as a schedule of events and a listing of clubs who train their dogs to perform.

Good luck to all the competitors! I look forward to seeing some of the competition on-line on Monday!