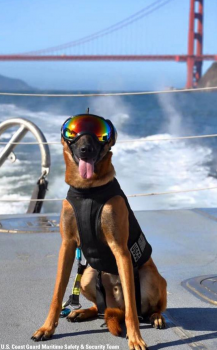 Apparently, when you take a dog on a Coast Guard cutter, you want to make sure he’s wearing eye and ear protection, not to mention a life vest. From the USCG Facebook page.

The Coast Guard has 15 canine teams total. Each team is comprised of one Guardian and one dog. There are two teams at every Deployable Operations Group (DOG) unit and one team at Sector New York. The DOG units include MSST Seattle, MSST San Francisco, MSST LA/LB, MSST Galveston, MSST Kings Bay, MSST New York and MSRT Chesapeake.

The Coast Guard launched the Canine Substance Detection Program approximately one year after the terrorist attacks on September 11, 2001. The program’s goal is to enhance detection and deterrence capabilities in the maritime environment, adjacent lands, and waterside installations.