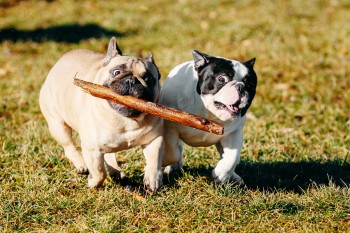 My new Monday feature brings you locations and details about dog parks in major cities. This week, we’re looking at New York City, which as you no-doubt know, doesn’t have a lot of green space outside of Central Park. To find out about dog-friendly areas in the city, I consulted Animal Alliance NYC, an initiative of the Mayor’s Alliance for NYC Animals. They list several reference sites, one of which is the NYC Parks Department, which in turn offers an extensive list. My list below gives you one example from each borough.

Brooklyn: Brower Park
Address: St. Mark’s Ave., Park Pl. bet. Brooklyn Ave. and Kingston Ave.
Type: Off-Leash
Notes: Except for playgrounds and other areas where dogs are expressly prohibited via signage, all areas of the park are off-leash during designated hours.

If you’re a New Yorker, where do you exercise your dog?