I know this is an ad for an adoptable cat, but it is so well written I wanted to share it. I spend a fair amount of time dreaming about getting another dog, and perusing rescue postings. Usually, they are written to fit a certain template and tell you just about nothing about the dog. This one, by contrast, really gets your attention.

I think better ads are more successful than boring ones, don’t you? I have to think the adoption rate would go up if rescues and shelters put a bit more thought into their adoption ads.

Without further ado, here is Marley’s ad from the Medina County (Ohio) SPCA: 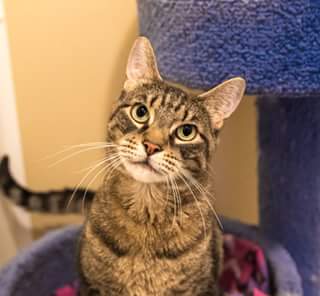 In 1993, Marley was caught chasing a neighbor’s sheep with a gas-powered leaf blower.

When questioned, Marley claimed that he was “teaching the sheep about tornado preparedness”.

It would be best if Marley were adopted to a home where he will not have access to any gas-powered landscaping equipment. Or sheep.

But he is NOT a cat for everyone.

Marley is a handful! He’s going to find trouble and he’s going to delight in it. He loves people, but HATES to be manhandled – he had to be sedated by the vet just to get his routine vaccinations. He lived with a dominant female cat and did fine with her, but he’s been jerky to other cats here. He’d probably do best as an only cat. He has lived with a dog and tolerated its presence.

Marley is not a cat for everyone – but that’s okay, we don’t need everyone to adopt him! We just need one person who wants a great cat with a fun, sparky personality and a crazy pants play style!

Marley is 7 years old, neutered, and current on his vaccinations. His adoption fee is just $25 during our summer special pricing!

Marley needs a home without small children. Because he lives outside of social norms and will probably teach them how to fill the bathtub with Coca Cola and throw in Mentos or something.

I hope Marley finds a loving forever home where they can accept the wild beast in him!