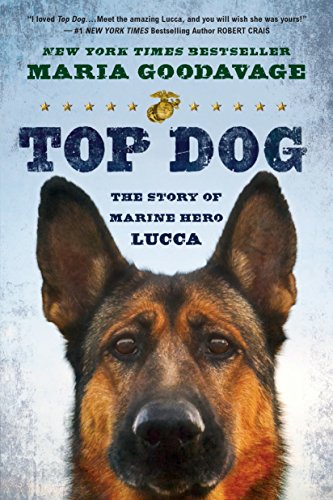 From the Working Dog Radio podcast:

Have you read the book “Top Dog” or know of Chris and MWD Lucca’s story?

Episode 145:⁣ Top Dog with ⁣Chris Willingham⁣
⁣Your Working Dog Radio hosts, Eric @vanessk9 & Ted @ted_summers, sit down with retired Master Sergeant with 20 years in the Marine Corps, and President of the United States War Dogs Association, Chris Willingham. ⁣
⁣
The majority of Willingham’s career was dedicated to the Military Working Dog (MWD) Program; Willingham served as a MWD handler, trainer, instructor, supervisor and program manager. ⁣
⁣
Willingham deployed to the middle east multiple times and was instrumental in developing or enhancing MWD courses, polices and orders due to his operational and training experience.⁣ Willingham and his MWD Lucca conducted counterinsurgency operations, located numerous improvised explosive devices, and were credited with saving countless lives. Lucca led more than 400 missions during her career, and no one was ever hurt until the day she herself suffered a severe injury on the battlefield. Willingham and Lucca were featured in Maria Goodavage’s New York Times bestselling book “Top Dog”.⁣
⁣
As a MWD subject matter expert, Willingham has been active in community outreach to bring awareness to the service and sacrifice of our MWDs and their handlers. Willingham has provided numerous print, television, and radio interviews about MWDs which include Good Morning America, The Today Show, Fox and Friends, LA Times, and the BBC. Additionally, Willingham has served as a keynote speaker for various events both nationally and internationally.⁣
⁣
On January 1st of this year, Willingham assumed the role of President of the United States War Dog Association, which supports military working dogs and promotes the long history of their invaluable service.⁣
⁣
Willingham and Lucca truly are MWD legends, so sit down, listen up, and learn a thing or two from the man himself! Help us honor their sacrifices, and check out the website, and consider donating!⁣ www.uswardogs.org⁣