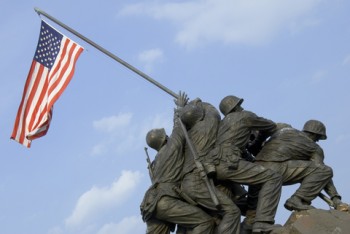 Top Ten Tuesday is pre-empted this week so we can bring you this special Veteran’s Day post.

We all know that many dogs serve with our military forces, sniffing out bombs and walking guard posts, among other important tasks.  But what happens when a dog is forced into retirement?  Statistics from 2006 show that 281 retired war dogs were adopted, 74 were waiting to be adopted, and 116 were euthanized.

Some war dogs are converted to stateside law enforcement when the military is done with them, but the older they grow before the military releases them, the less likely they are to be wanted by police departments.

Ron Aiello serves as president of the U.S. War Dogs Association.  He says there are about 2,500 active war dogs, with about 700 of those serving in the Middle East.  While some of these dogs are adopted by their handlers when they enter retirement, it is sometimes posible for civilians to adopt war dogs.  His association works to make sure none of the dogs end up being euthanized.

Military Working Dog Adoptiions also works to make the adoption of military K9s easier.  Their site boasts a memorial pictorial of military dogs at work, as well as application forms you can submit to bring one of these hero dogs into your home.  Their detailed instructions can help you find success in working through the government bureaucracy to benefit those K9s who served alongside our 2-legged armed forces.