Have you ever come home and found a snowstorm in your living room?  If so, you know what a pain in the tuckus it can be to clean up after your dogs have destroyed a typical stuffed animal.  SPOT Pet Products has found a solution, and they sent me a couple of samples to try out.

END_OF_DOCUMENT_TOKEN_TO_BE_REPLACED 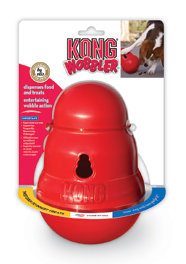 END_OF_DOCUMENT_TOKEN_TO_BE_REPLACED

I was surfing on YouTube and came across this ad for the Kong Wobbler.  This is one I just may have to try.  It’s kind of like a Weeble toy (Remember?  “Weebles wobble, but they don’t fall down”), only you stuff it with treats, and as the dog bats the toy around, the treats come flying out.

Has anyone tried this with multiple dogs?  Wonder if they’d fight over it??? 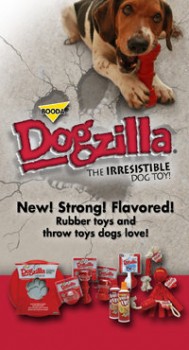 I was privileged to receive a box of Dogzilla toys a week or so before Christmas for my dogs to try out. I have waited to blog about them because I wanted to see how they would hold up, and I am happy to report they have done well.

These toys are similar to the Kong toys in that they are just about impossible to destroy and you can hide treats inside to give your dog some mental stimulation while he or she is playing. Dogzilla has some innovative designs such as a toy that you can fill with water and place in the freezer for those dogs with an ice cube fetish.

Here is what the company claims:

Petmate’s Dogzilla toy line is the biggest thing to ever happen to a dog’s toy box! Not only do these boredom-busting toys offer an ultimate way for a pooch to release energy, exercise and stay mentally stimulated, they are perfect for heavy chewers as well as parent-pet interaction. The Dogzilla toy line is ideal for a pooch of any age, size or breed – whether they are an ice cube fanatic, prefer tug-of-war, love to fetch or problem solve, or simply enjoys a toy they can “attack.”

I have to say that I found their claims to be quite truthful.  My dogs range in size from 25 to 65 pounds and in age from 2 to 9, and all enjoy the toys they are sampling.

For more information, check out their Facebook page.  The page includes the company line, as well as both positive and negative comments from people who have purchased from them.

These toys are available at many pet retailers, as well as over the Internet.

If you try them out, let us know what you think! 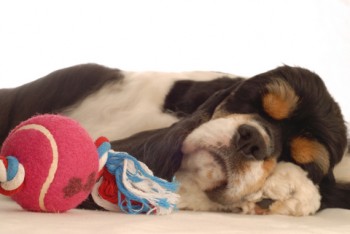 Does your dog have a favorite toy?  Based on my experience with my own dogs, here are my picks for the top 10 toys ever.

END_OF_DOCUMENT_TOKEN_TO_BE_REPLACED 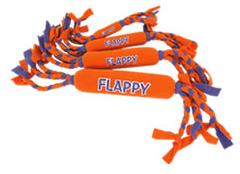 I got an e-mail the other day from Fucini Productions, the company that makes a new toy called the Flappy.  It’s a chew toy with a cylindrical body, and  tails on both ends that “flap” to enhance your dog’s enjoyment.  The picture here shows braided tails, but on the model I received, they were unbraided.  They have five types, each in four different sizes:

They even sent me a couple of them to try out on my dogs.  Here’s the scoop:  my dogs LOVED the Fleecie Flappy, even though they are not teething.  However, (and perhaps because they aren’t teething puppies) they were able to totally destroy the toy in a day or two of rough play.

They weren’t wild about the Tuffy Flappy.  It does look a lot more durable than the Fleecie, but if they don’t play with it, I’m not sure it’s worthwhile.

Now, at this point, I have to tell you, that Cooper (my Vizsla) plays by the toddler rules of ownership:  if I see it, it’s mine; if I think you want it, it’s mine; and if you touch it, it’s definitely mine!  So, while he tried to hog the Fleecie, I squeaked the Tuffy to try to get him interested in it.  He came over and took it out of my hand (both toys are now in his mouth), but he dropped it again as soon as he was sure I wasn’t going to take it away from him.

Now that the Fleecie Flappy is gone, we’ll see if they turn to the Tuffy.  I really think they just don’t like the texture, taste, or whatever of the fabric.  It’s the same basic toy as the other one and has the same squeaky noise, but it just doesn’t appeal to them as much.

I hope you won’t take this review as totally negative, because while it lasted my dogs had a BLAST with the Fleecie Flappy.  Penny even took it outside and gave it a good dragging through the mud.  My youngest didn’t want them chewing on mud, so he washed the toy.  It handled hand-washing very well and is advertised to withstand machine washing, although we didn’t try that.

Have you tried this toy?  Did your dog have a different opinion than mine?