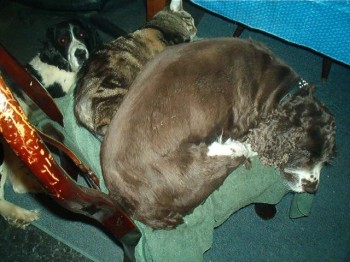 Mom lives out in the country with two English Springer Spaniels named Rosie and Rochester.  After a bad thunderstorm brought down several large branches, she and the dogs were outside cleaning up.

Rosie wondered off for awhile, then came back carrying something in her mouth.  Rosie’s a good hunter, so it was not unusual for her to bring back rabbits, which is what Mom assumed had happened.  But when, Rosie got closer, Mom took a closer look and found it was a kitten!  The baby, about 4-weeks old, was very softly carried in Rosie’s mouth, just as if the dog were the mama cat.

Mom adopted the cat, who now sleeps with Rochester and Rosie on the couch.