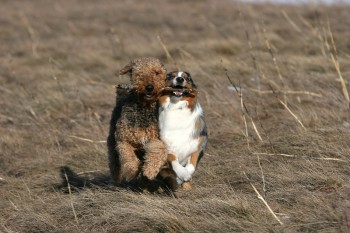 You know, The Dog Whisperer has made an entire living off the concept that dogs and humans need an interpreter.  Turns out my dog, at least, understands good old-fashioned English.

I let all four of the dogs out into the backyard yesterday, but when I opened the door to let them back in, only the three big dogs came back.  “What did you three do with your sister?” I asked, like they would really tell me.

Cooper immediately bent down and picked up a tug toy, then pushed open the back door and went back outside.  I wasn’t sure what he was doing so I watched him from the kitchen window.  He bowed down, inviting Penny to play with him.  When she came up to him, he ran back to the door, leading her all the way.

I opened the door to let them in, assuming they would be knocking things over, playing with the tug toy and being wild in general.  But, as soon as they got inside, Cooper dropped the toy and walked away.  Such a smart boy!  He just went out to find the puppy!!!