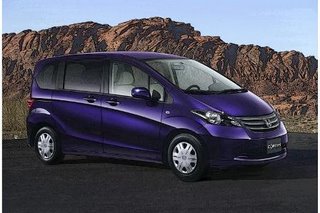 Honda has decided that a key demographic of potential car buyers in Japan is that they love dogs!  (Of course, who doesn’t?)  In fact, the Japanese have more dogs and cats than they do children under the age of 15.  As a result, Honda has begun designing cars specifically to be canine-friendly and even has a website devoted to the initiative:  honda.co.jp/dog/.  (It’s in Japanese, but you can look at the pictures.)

A concept car shown at the 2005 Tokyo Motor Show was designed especially for dogs:  detachable, easy-to-clean seats, wood floors, and a netted-built-in pup crate.  The new Freed minivan, just launched in Japan, is an example.  The van has the lowest floor yet, allowing even short dogs to jump inside without help.

Dogcars.com gave Honda its first ever “DogCar of the Year” to the 2007 Honda Element SUV because it has an easy-to-clean interior and anti-noseprint windows.