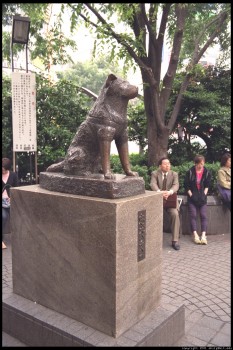 I’m not sure when this is due out, but Richard Gere is now publicizing his new movie, called “Hachi:  A Dog’s Story”.  I don’t know whether this is based on a true story or on an urban legend, but the Japanese feel very strongly about the dog known as Hachiko.

It appears that Hachiko would follow his master, a college professor, to the bus station each day and wait for him to return at the end of the workday to accompany him home.  Even after the professor died, the dog still waited at the station for another ten years until he himself passed on to doggie heaven in 1935.

The people of Japan were so moved by this dog that they had a statue erected at the train station, which has since become a landmark.

Hachi’s story was made into a Japanese movie in 1987.  This new version is set in Rhode Island, and Gere notes that the dog is definitely the star of the show.  Pointing to the Akita’s notorious stubborn streak, Gere says they would often film the three dogs playing the part of Hachi for hours, waiting for them to perform whatever they were supposed to do, then they would call Gere in for ten minutes to do his part of the scene.

If anyone has information on when we can see this movie, let me know.  It was premiered at a film festival last month & opens in August in Japan, but I didn’t see anything on a US release.  You know I’m a sucker for anything with dogs in it, and I just love Richard Gere, as well!