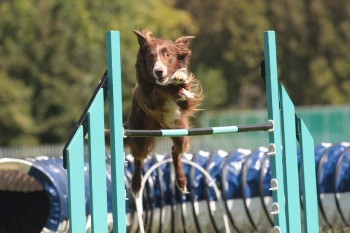 Cooper / Pyrenean Shepherd: A little slow, and went off-course at jump # 9, but picked up at the end. Not as stellar as his fellow Pyrenean Dash.

Brolin / Kerry Blue Terrier: I love this dog’s style – big jumps and a cute little bow at the end of the teeter totter. Missed jump 9, though.

Bristol / Siberian Husky: What a gorgeous dog! Unusual for an agility competition, but let’s see how he does. A little on the slow side, but a nice clean run. This handler, like only one of the previous ones, led her dog to the far side of jump 9 to help the dog succeed.

Kimi / Golden Retriever: She looks so excited to get started! Oops! Missed a jump coming out of the collapsed tunnel. She is also an older dog, running under modified rules (lower jumps). Nice job!

Poppet / Bearded Collie: Nice clean run, except for going the wrong way through the tunnel. And Poppet was talking the whole way through.

As we go to commercials, Bristol is in the lead, the only dog to have run without faults.

Jackie D / Aussie: these dogs are excellent in agility. My friend Chris has trained his Sloopy to do all sorts of tricks, but they don’t compete. Jackie d is running well, but knocked down one jump pole. Big surprise, because he was getting some serious big air earlier. Other than that, a terrific run!

Panda / Mutt: Running a little slowly. I don’t think they reset the jumps for an older dog, but she’s running as if she might be elderly. Good, clean run puts her in second place.

Kelso / Border Collie: Creeping up to the start in true herding fashion. Good job on jump 9, with a nice, tight turn into jump 10. Excellent run! And she jumps into the lead.

Tex / Border Collie: This dog competes internationally, so he shouldn’t have any problem on jump 9. A little wide on his turns, but running a stellar course. Oops! Slipped and nearly fell. Clean run, but just a little long on time.

Glance / Border Collie: Slipped going into the teeter totter, but recovered well. Oh no! Gave up on the weave poles – wanted a little bit of love. He may have been hurt when he slipped at the beginning. Good on the handler for letting it go and carrying Glance off of the course rather than trying to finish.

Congrats to Kelso and handler Cindy Ratner with her second win tonight. The program lists Delaney Ratner as the handler, but I think daughter Cindy actually ran the course tonight. If not, congratulations to Delaney on looking like her daughter’s twin sister!