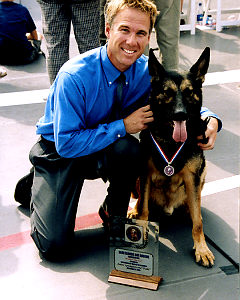 (Picture of James Symington & Trakr from the NY Times.)

Whether or not you think dog cloning is a good idea, this is kind of a neat story.  Remember the contest run by BioArts International, a biotech company in Northern California?  They offered to clone dogs for free for the highest auction bidders, but they also ran an essay contest to pick one of the dogs for free cloning.  Have you heard who won?

This is the neat part.  The winner of the essay contest was James Symington of Los Angeles.  Symington is a former Canadian police officer, and he wrote his essay about his  police dog, Trackr.  The two formed a search and rescue team at the World Trade Center site after the 9/11 bombings.  They helped rescue the last living person  from the rubble.

I’m not so sure I can think of a better dog to be cloned.  Trakr is now 15 years old and has lost the use of his hind legs, possibly due to the toxic fumes from the site.

Lou Hawthorne, the CEO of BioArts, says Trakr’s story blew away the judges.  “His many remarkable capabilities were proven beyond all doubt in our nation’s darkest hour – and we view the work of cloning him as a great honor.”

Trakr’s DNA sample will soon be flown to South Korea for cloning, with the pup expected  to be back in Los Angeles by the end of the year.

In part, Symington’s essay said, “Once in a lifetime, a dog comes along that not only captures the hearts of all he touches but also plays a pivotal role in history,”  Looks like maybe he’ll get the honor of knowing such a dog twice in his lifetime.