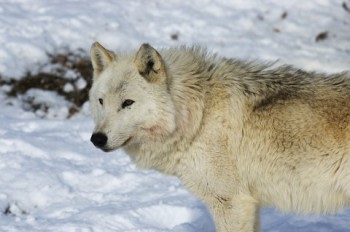 A little science lesson for you today, and pay attention, as this will be the subject of tomorrow’s Survey Saturday.

I think most of us would agree that dogs evolved from wolves, but have you ever wondered how that happened?  Turns out there are four competing theories.

The first theory is that wolf cubs who became orphaned, for whatever reason, may have been hand-raised by humans, making them much easier to domesticate.  When these wolves subsequently mated, the offspring became closer and closer to what we now know as a domesticated dog.

The second theory is that some wolves learned that it was much easier to get food from humans than from hunting down other wild animals.  They also learned that the way to get food from humans was to be cute and cuddly, not wild and scary.  In a “survival of the fittest” theory, this way of avoiding starvation led wolves to self-domesticate as a way of preserving the species through lean times.

The third theory finds that wolves were domesticated through their use as beasts of burden.  They may have been the original sled dogs, and became domesticated by virtue of the fact that mushers fed them to assure their high performance as workers, resulting in their losing some of their wild characteristics.

The final theory is that wolves were often seen simply as providers of food and fur to early man.  As men wanted more and more of these commodities, he found that feeding wolves brought them to him, rather than man having to go out in the forests to hunt the animals.

So, give it some thought over night, then come back tomorrow for our Survey Saturday, where you can let us know which theory you think makes the most sense.

One thought on “Origins of the Domestic Dog”