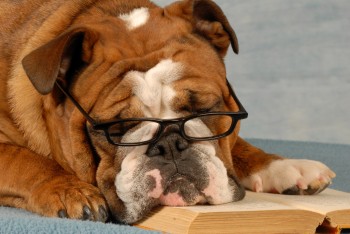 The study classified dogs as carnivores, social hunters, and domestic animals. They then compared other animals in these three classes to dogs, coming to the conclusion that dogs just aren’t that special in terms of intelligence.

After analyzing over 300 studies on the cognitive abilities of animals, the authors conclude, “When a broad-enough set of comparison species is considered, there is no current case for canine exceptionalism… It is what we would expect of cognition in a domesticated socially hunting carnivoran.”

For example, some of the studies pointed out that pigs have a better sense of smell than dogs, and that seals and dolphins can follow hand signals from handlers just as well as dogs.

My favorite tweet about the article comes from Will Federman (@wfederman): pretty well written for a cat.

I guess I’ve never thought my dog was actually that smart, but she definitely has me wrapped around her paws!