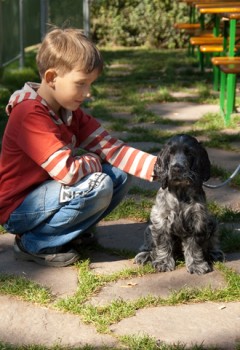 A study by a University of Wisconsin-Madison pediatrician showed that infants in homes with pets have a lower incidence of pet allergies and eczema than their pet-less peers. Finnish researchers have found that young children with dogs or cats suffered fewer ear problems than children who did not live with pets.

Do you need a better recommendation to have a dog in your home? Studies have even shown that kids who have pets in their home spend about 10 minutes per day more than others in physical activity which can help ward off childhood obesity.

Now comes news from Pets for Patriots that dogs can actually help the children of the military cope with the stress of having a parent deployed. According to a study by the American Academy of Pediatrics, the Wall Street Journal reports that children from military families
were twice as likely as those from civilian families to report experiencing elevated anxiety symptoms, such as getting frightened for no apparent reason or feeling that they couldn’t be alone. Some 30% of children from military families reported experiencing such symptoms, compared with 15% of children from civilian families, according to the study.

Pets for Patriots is a program that helps military and veteran families hook up with shelter dogs who need to be adopted. Sounds like the benefits go both ways!