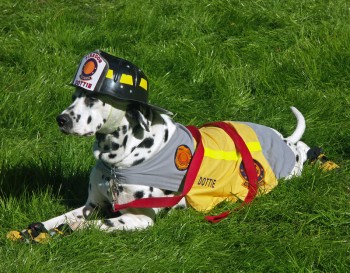 Have you ever watched an arson dog work?  It’s fascinating!  Here in Canton, Ohio, the fire investigators will bring their dog out to public events for demonstrations.  If you have this option where you live, be sure to go see it.  They say that the sense of smell is the most vivid of our senses, bringing back memories we didn’t know we even had when we smell something similar.  Now, imagine a dog, whose sense of smell is tens of thousands of times more acute than ours.

In the demonstration I saw, the investigator took three tuna fish cans, which obviously would smell pretty good to a dog.  One of the cans was “marked” with just the slightest trace of eau de gasoline, and the dog was able to tell which can, even though all had that luscious smell of tuna fish.

Next, the investigator layed out several items of clothing.  On the shirt was a bit of some kind of accelerant.  The dog signaled he had found his target by sitting.  The dogs are trained to just sit down when they find what they are suppposed to have found.  The arsonist just thinks the dog is well-trained and will stand there and pet the dog while the police move in to arrest him.

Arsonists are known for returning to the scene of the crime to see their work.  The investigator, in plain clothes, will simply walk the dog through the crowd and wait for him to sit down next to someone.

In addition, the dog can be walked through the burned building.  In spite of the overwhelming smell of smoke, the dog is able to pick out where accelerant may have been used to spread the fire.  It’s pretty amazing.

3 thoughts on “The Nose Knows”