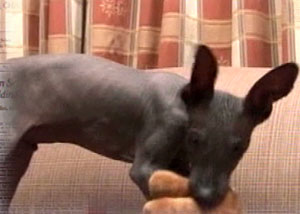 OK, the economy is tanking and we have two wars going on, but it seems everyone is more interested in which dog the Obamas will take to the White House.  The news today includes an article from allergists, asserting that there is no such thing as a hypoallergenic dog.   And, different breeders are offering potential dogs to the First Family-elect.

First, from the American Academy of Allergy, Asthma, and Immunology:  “There is no such thing as a hypoallergenic dog.”  They cite the fact that what causes people’s allergic reactions is the dander present on a dog, composed primarily of dead skin flakes.  They say that what seems to make the difference between breeds is that some breeds have grooming requirements that require the dog to be bathed and brushed more often, making it less likely that dander will flake off around the allergic person.

That may be true, but as an allergy sufferer and dog lover, I can tell you that I groom all of my dogs the same amount, but the long-haired breeds cause me much more trouble than the short-haired ones.

Moving on, the Association of Hairless Dogs of Peru, has offered to give the Obamas a 4-month old hairless dog named Machu Picchu from a breed that pre-dates the Incan civilization.  OK, now do they realize that this dog is for the kids?  While the name sounds like something from Pokemon (cool for kids), the dog is just butt-ugly.  I can’t see two little girls wanting to play with something that looks like the picture above.  Can you?

And, the AP brings us this note, as published in the Chicago Tribune:

“Pat Banachowicz (Ban-ah-HOH-witz) of Colgate breeds Australian Labradoodles and has written a letter to future first lady Michelle Obama, offering one of her puppies.  Banachowicz says they are great family dogs because they have Labradors’ personality, don’t shed and are hypoallergenic. She says few hypoallergenic dogs end up in shelters.  Banachowicz says Australian Labradoodles usually cost $2,500 but she probably wouldn’t charge the presidential family.”

2 thoughts on “The Obama’s Dog”