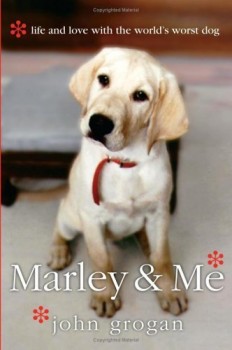 Wow!  What a great movie!  I laughed, I cried….but it was not at all what I expected.  When you watch the commercials for “Marley and Me”, you get a sense that the movie will be a physical comedy about the antics of a misbehaving dog.  Although there is some of that, the movie is really about John Grogan’s life, with Marley providing comic relief.

I just went on my local library’s website because I thought I remembered that when I read a book about Marley, the introduction said it was the second book.  I was right – I think I have read “Marley – a Dog Like No Other”, but I don’t think I ever read the original.  The movie is actually a compilation of both, taking us through Marley’s life from cradle to grave.  (BTW, John Grogan has written a number of other books, as well – some about Marley, some not.)

While I was looking at the website, I noticed the full title of the first book:  “Marley and Me:  Life and Love with the World’s Worst Dog”.  It is really the second half of this title on which the movie focuses.  John Grogan is a journalist who struggles with the question of whether it is better to be a reporter or a columnist.  As his boss puts it, “you put some of yourself” into a column, but a reporter simply tells the facts.

The movie parallels this theme.  It is not so much about the facts of Marley’s life; it is about Grogan’s life with his wife and three children.  Oh, and by the way, he has a dog who likes to chew things and run away.  Other than during the very touching ending, Marley, who is in nearly every scene, is not the center of the show.

And this is actually a good thing.  Watching a dog misbehave likely would not have made a successful movie – I can see dogs being bad at home for free, four times over!  But by blending the story of the journalist’s life with Marley’s story, the movie provides a look at how we all live – the good and the bad, the embarrassing times and the proud moments.

I was a bit apprehensive about the cast, as I am not a huge fan of either Jennifer Aniston or Owen Wilson.  However, these roles changed my mind a bit.  They both did a great job as Marley’s parents, and realistically reflected the stress of trying to socialize a dog who refuses to cooperate while simultaneously raising three children and juggling careers and home life.

I highly recommend this romantic comedy, not just for dog lovers, but for anyone who is part of a family that has ever had to learn to find the humor in life’s troubles and has emerged on the other side with family intact and hope for the future.

3 thoughts on “Mad About Marley”