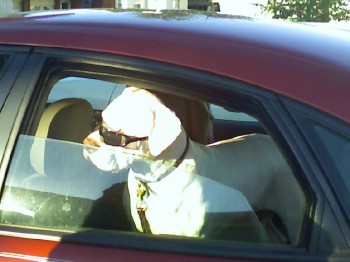 So we pull into the gas station this evening and look at the car parked next to us.  In the back seat is this huge white dog wearing shades!  I tried to get his attention, but he had his eyes on his driver, who was in the pizza shop next door.

I just had to go into the pizza shop and get the guy to come out and tell me the story.  Evidently, Baby kept nudging him for his sunglasses, so he put a pair on the dog.  Baby will wear them the whole time he is in the car.  The guy said Baby doesn’t stick his whole head out of the car window, but he thinks maybe the shades help shield his eyes from the wind.  I wanted him to take Baby out of the car for his picture, but he said that he shakes his head to remove the sunglasses as soon as he gets out.

Is this not the funniest / cutest thing you’ve ever seen?

7 thoughts on “I wear my sunglasses at night!”