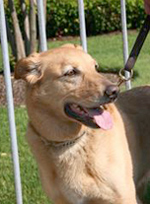 I hate to brag, but I have to say again how proud I am of my day-job employer, American Electric Power.  The company’s Appalachian Power subsidiary recently hosted the K-9 teams from the Virginia State Police at their Smith Mountain Dam for a training exercise.

Jack, pictured, and his buddies needed a space to practice searching for explosives and other weapons.  And since power plants like the dam are known potential terrorist sites, the fit was a good one.  The teams are required to train at least six days per month to keep the dogs and handlers’ skills fresh, so they seek out locations throughout the state of Virginia in which to practice.

The Smith Mountain site was chosen because its sprawling property gave the troopers lots of good hiding places to plant rolled up towels that had been scented to simulate weapons.  When the dog finds the target, he is treated to a game of tug of war with it, as well as lots of praise and petting from the handler.

The teams were also given an extensive tour of the site to prepare them for a possible real call to look for terrorist-planted bombs or other devices.