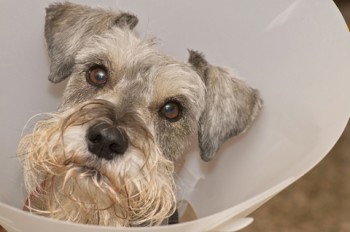 On one of his recent escapades running loose through the neighborhood, my Vizsla, Cooper, ended up with a nasty open sore on one of his foot pads. Of course, he didn’t want to leave it alone, and I didn’t want to put him in one of those ridiculous Elizabethan collars, so I did a bit of research on bandaging on a dog. Thought you might be interested in what I found.

First, of course, you want to make sure the injured area is clean and treated with an antibiotic cream, then you want to bandage it to keep it clean, keep the medication in place, and keep the dog from worrying over the spot and creating a potential hot spot.

Put a gauze square over the antibiotic ointment, then wrap the area with a strip of gauze to keep the square in position and to provide extra padding to protect against bumps.  This part is just the same as what you would do for your two-legged children or for yourself.

The hard part with a dog is that any bandage becomes an immediate chew toy, so you need to find a way to keep the dog’s mouth away from the bandage.  If the boo-boo is on his or her torso, you might try putting a T-shirt on your dog, putting his front paws through the arm holes and tying the hem of the shirt around his mid-section.

If the bandage is on a paw, the easiest solution is to put a heavy tube sock over the injured leg.  You can use a large rubber band or some bandage tape to keep the sock up.  Make sure you allow enough wiggle room that the leg circulation is not cut off.  You should be able to insert at least one of your fingers inside the top of the sock after you have taped it closed.  If the leg swells, make sure you re-check the bandage for tightness.

There is a product called Vetrap which is available in pet stores.  It comes in several bright colors from 3M.  You may have seen it used at blood donation drives to create pressure bandages..  It is an elastic bandage that sticks to itself and can be wound around the gauze layer or used to hold a sock up on the dog’s leg.

Let us know what you’ve tried that has worked.

One thought on “Bandaging Your Dog”