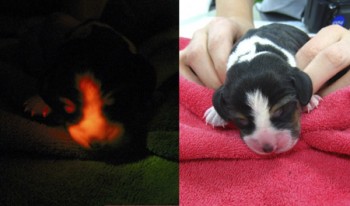 Reuters is reporting that the South Korean scientists who cloned a dog to create a Beagle named Snuppy, have now created a dog who glows red.  At a cost of about $3 million, they inserted a gene that makes the dog glow when he is fed doxycycline and viewed under an ultraviolet light.

Tegon, the genetically modified Beagle, took about two years to create at Seoul National University.  It is hoped that the same cloning technique that creates the glow can be used to cure human ills like Alzheimer’s and Parkinson’s.

“The creation of Tegon opens new horizons since the gene injected to make the dog glow can be substituted with genes that trigger fatal human diseases,”  lead researcher Lee Byeong-chun said.  The scientist also said that because there are 268 illnesses that humans and dogs have in common, creating dogs that artificially show such symptoms could aid treatment methods for diseases that afflict humans.

So, here’s how my mind works.  You know how every once in awhile I feature dogs who have been dyed by doggie beauty parlors to make them look like something else?  Wonder if these scientists can give the dog different antibiotics that will allow us to choose the color of dog we want.  I’m going for pink!  How about you?

2 thoughts on “My! How your doggie glows…”