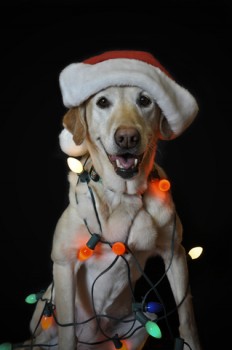 Thanks to friend of the blog, Rob Worrall, for sending in this story tip from the Belfast Telegraph. When Sharon Fay’s scarf went missing awhile ago, she ended up having to subject her dog Charlie to surgery to get it back. So, she knew just where to turn when a string of Christmas lights disappeared.

Actually, what made her notice that the lights were missing was when she was cleaning up the yard and found bits of wire in the dog’s excrement. An X-ray revealed remnants of the light string still in the dog’s tummy, and another operation ensued.

Charlie is now doing fine, but I can testify to the problems caused by dogs who think everything is food. My Golden would not stop vomiting one weekend, so we had to take her to the emergency vet. $1600 later, the vet presented us with a gallon-size Ziploc bag containing all the stuff he took from Maggie’s stomach. The thing that had caused the most concern was a piece of a kid’s toy that had a small wire inside the plastic piece so it would stick to a magnet. From the X-ray, it looked like it was an exposed wire or paper clip, that the vet was scared would puncture the stomach or intestines, so we had to do the emergency surgery rather than waiting until our regular vet was available.

Another time, our dogs ate a glass Christmas ornament. On that occasion, the vet told us to feed them mashed potatoes, which would coat the glass so it could safely pass through and out of the dogs. Not exactly the news I wanted to hear on a day when I was preparing a meal for 27 family members, but it all came out ok in the end. (Sorry – had to use that pun at least once in this story.)

Anyways, we’re all glad Charlie is ok now, and here’s wishing none of the rest of you have to make that scary trip to the vet for missing toys, lights, or ornaments this year!

One thought on “Rudolph the Red-Nosed…um…dog?”