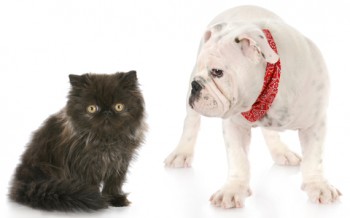 Today, we welcome guest blogger Ron Rutherford to this space. The Dog Lady will be back tomorrow.

Where there is smoke, there is fire ladies and gentlemen. The old saying “fighting like cats and dogs” didn’t just show up out of nowhere. Although the saying may be tired, it definitely isn’t out of date. Dog versus cat. Cat versus dog. It’s the ultimate arch nemesis relationship even rivaling that of North and South Korea. If you happen to be the owner of a dog and the slave to a cat at the same time, it might seem like World War III is going to break out in your home at any minute.

What makes their rivalry so dramatic is the fact that they have completely different war tactics. Dogs tend to use the “economy of force” tactic. In other words, they know that they are bigger, stronger, and faster than their opponent and have no problem firing at will and charging the enemy. Cats on the other hand, play a little different. Being at war with a cat is like being dumped off in the middle of Vietnam; you could be attacked at any moment, from any angle. Cats make use of terrain and barriers as a defense tactic and then ambush the enemy when they least expect it.
In order to not be taken hostage in such a situation, you can’t play the neutral card and turn a blind eye. You need to actively engage yourself in the battle. Reprimand unwarranted attacks and even work towards preventing them from happening.

Prepare Yourself for Battle
So how do you prevent attacks from happening when warfare is innate to them? The first thing you need to assess is what exactly they are at war over. Are they disputing the dispersal of territory and vital resources? What about the allocation of finer goods such as bones and other treats? Or could they possibly be at war because they simply cannot stand the fact that the other exists in the same relative area? They obviously feel a sense of superiority over one another so it must be something.

Identify who the offense and defense are. Some dogs have an extremely strong predatory instinct. When a cat is fearful and runs, the dog’s instinct is triggered and he can’t help but chase the cat. Dogs chasing cats is probably the biggest issue to resolve when it comes to cats getting along. On the other hand, some cats tend to lash out at dogs because they are fearful or simply want to assert the dominance within the household.

Distribute Resources
Once you identify what the source of contention and the main offender, you will be able to begin to mediate and remedy the situation. If it is territory that they are disputing, it’s possible that they just need more space. Install a dog door so they can come and go when they please. Make sure that your cat has plenty of areas to retreat to that your dog isn’t able to access. Block off an area or encourage your cat to move to higher ground by placing bedding or treats at a higher location where they are able to nap. If food resources and treats are the issue, always feed them separately. If your cat is free-fed, make sure you place the food where he can access it but the dog can’t.

Retributive Justice
When you have established that territory and resources are no longer issues, most of the contention should be resolved. If this isn’t the case, it’s possible that your pets are fighting simply out of instinct. At this point you need to step in and do some obedience training. Teach the “leave it” command and enforce it when used. Obedience training generally works best with dogs as cats are free agents and will do as they please. That being said, you are welcome to pick your own battles.

Reprimand negative behavior but don’t favor one over the other. It’s easiest to take sides with your cat but remember the goal is to get your pets to coexist without constantly planning the other’s demise. If kitty decides to launch an unwarranted attack, don’t coddle him and reinforce his negative behavior.

The reality of the situation is that dogs and cats are very different species with their own traits and instincts. They may never become best friends but you can work towards creating a sense of harmony between them.

Author Bio:
Ron Rutherford is a writer with a passion for nature and a soft spot for Thai food. He currently freelances for havahartwireless.com, which specializes in progressive and humane wireless dog fences.

3 thoughts on “Canines versus Felines: How to Avoid Guerilla Warfare”