There’s nothing like being in a room full of dog lovers. That was the scene at the North Canton Public Library yesterday morning when Stark County Dog Warden Jon Barber spoke to a group of concerned residents about changes he’s made over the past year at the Dog Warden’s Office and Shelter. Even the name is new. It used to be the pound.

This event was another in the week-long series called Doggone North Canton, presented by Pawsitive Ohio.

Why should you read on if you’re not in Stark County? Many of the lessons learned here can be applied to your location, making sure more dogs are treated humanely and increasing adoption rates at all facilities.

Barber comes to the Dog Warden’s office with an impressive resume, having previously been in the K-9 corps as a county deputy, a director of security services and a director of county homeland security and emergency management services. He has a Masters Degree in Public Administration and is one of only two dog wardens in the state to have held the position in two different counties. Oh, and did I mention he’s just a nice guy?

Working with a staff of just nine people, in 2013 the warden’s office took in 1620 dogs, completed 828 adoptions, reunited 367 dogs with their families, and sent 221 dogs to area shelters. Unfortunately, they did have to euthanize 210 dogs, but Barber points out that many of these were dogs whose families surrendered them for voluntary euthanasia after the dog became critically ill or injured, or after the dog bit someone. The dog warden cannot put a known biter up for adoption due to liability concerns.

The Stark County Dog Warden’s office does not use a time limit to decide when or if a dog should be euthanized. When they run out of space, they simply call area rescue organizations and the humane society shelter to transfer the dogs. Only ill, vicious, and un-adoptable dogs are put down. In fact, in what I consider the most impressive change at the shelter, they have converted the euthanasia room to a vet care room! Instead of automatically putting down dogs who come into the shelter with health problems, Veterinarian Stacey Bridges works three days a week, providing preventive care and spay / neuter services.

How is all of this funded? Not by tax dollars, at least not in Stark County, Ohio. The Dog Warden’s office is funded fully by dog licensing fees, supplemented by adoption fees, which are lower than many other places. The $86 standard adoption fee covers a current dog license, a 5-way vaccine, a rabies vaccine, a microchip, and spay / neuter surgery. In many cases, a sponsor pays $36, so the adoptive family only has to pay $50 for the spay / neuter surgery. No unaltered dogs leave the warden’s facility.

The warden’s office sells 45,000 to 46,000 licenses each year, although demographics of the county suggest that there are likely 84,000 dogs in the county. One comment Barber made I found especially interesting: only a dog license establishes legal ownership of a dog. Even if you have all of the registration papers and the bill of sale for a dog, your ownership can be challenged if you don’t have a current license.

Some of the services provided by the dog warden’s office include:

Hundreds of volunteers assist the staff by walking and bathing the dogs, posting pictures of adoptable dogs on PetFinder, providing extra TLC to dogs who need it, and providing information to potential adopters about the dogs at the shelter. With their outdoor space and the assistance of volunteers, each dog at the shelter gets about 15 – 20 minutes of outdoor play time each day.

The shelter currently has 29 large cages with attached dog runs, which is woefully inadequate. Aggressive and non-aggressive dogs are housed in the same room, which makes all of the dogs less likely to be adopted. They are trying to raise funds to add space which would allow them to separate the more aggressive dogs.

They have 10 – 15 puppy cages, but large-breed puppies do not fit. Again, extra space would help to alleviate this problem.

They have 10 – 15 quarantine cages and are in the process of building a new total isolation facility. Importantly, every dog who comes into the facility receives a heartworm test, a preventative bordatella vaccine, and worming. This prevents the new dogs from infecting dogs already at the facility.

They also have 25 “general” cages for the remainder of their population.

The staff and volunteers have spruced up the facility including brighter lights and paint to make it more inviting. Coming soon: dog runs will be moved out to the front yard to increase the visibility of dogs who need to be adopted. 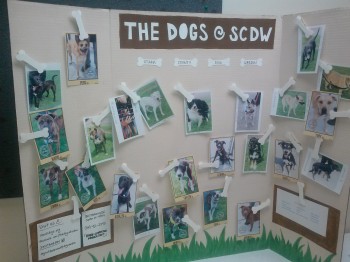 All of the dogs available at the Stark County Dog Warden’s office are shown here – notice how few there are? They attribute this, as well as the upgrades at the shelter, to a group called Friends of the Pound, which helps with fundraising and advocacy for the dogs at the facility.

How can you help your local dog warden? Barber gives the following list:

Barber points out that there are several fake Facebook sites which say that certain dogs are supposed to be immediately euthanized, or spread other false information. Here’s a link to the REAL Stark County Dog Warden page. Check them out!

Another change: Barber asks that they stop referring to their dogs as Pit Bulls. There are very few purebred dogs at the shelter, so he prefers the less stigmatized term of “Bull Terrier Mix”. He’s hopeful this will increase their adoption rate.

Come back Sunday to hear about Rich, a recent stray taken in by the Stark County Dog Warden.