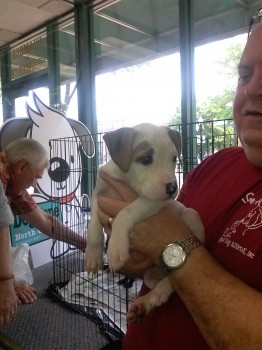 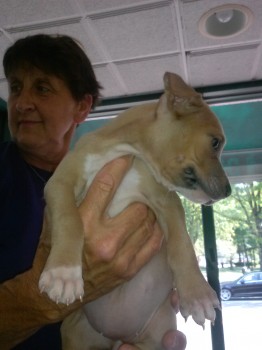 Yet another event in the weeklong Doggone North Canton, presented by Pawsitive Ohio. Here, puppies from Save a Mom rescue were shown off in the front window of the North Canton Chamber of Commerce. Here’s the story on these two cuties.

When the Stark County Dog Warden was notified that a man was wanted on a warrant and had two vicious dogs on the premises, dog warden deputies responded with the sheriff. The owner surrendered one male and one female dog, and informed the dog warden that the female had given birth to four puppies just the day before.

The adult dogs were too vicious to be rehabilitated (according to dog warden personnel), and were put down. One of the puppies had, unfortunately, been suffocated when the mama rolled over on it. The other three were sent to Save A Mom rescue, and are just about ready for adoption. They are 6 – 7 weeks old.