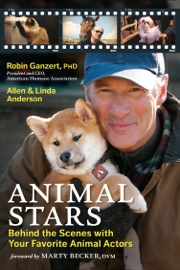 Ever wonder how Mr. Jinx (a.k.a. Charlie) learned to miraculously flush a toilet in Meet the Fockers? How the actors and film crew dealt with 300 real Snakes on a Plane? From Joey the horse in War Horse to the wolves in Game of Thrones, what the public sees onscreen is just the beginning. AHA CEO Robin Ganzert has been hard at work on a new book, “ANIMAL STARS: Behind the Scenes with Your Favorite Animal Actors.” (New World Library).

ANIMAL STARS reveals the tireless work and heartwarming stories of the trainers, actors, directors and, of course, the dogs, cats, horses and hundreds of wild animal actors in their behind-the-scenes glory. A portion of the proceeds will aid the AHA.

– Pinky and Richard Dent (Mr. Poppers Penguins) – the onscreen lovable penguins whose naturally suspicious instincts had to be overcome and whose off-camera digs included sleeping in a private frozen warehouse complete with a giant swimming pool; to

– Casey the Bear (Beverly Hillbillies, Evan Almighty) – the hilarious bear who insisted on a daily KFC delivery (Original Recipe – no other brand would do), and who refused to work in the rain – forcing production to accommodate his schedule; and

– Hightower the brilliant horse who won America’s hearts as the star of the Horse Whisperer and took his job so seriously, he earned an Actors Equity Card and could tell the difference between rehearsals and real takes.

The book is available now from Amazon.com