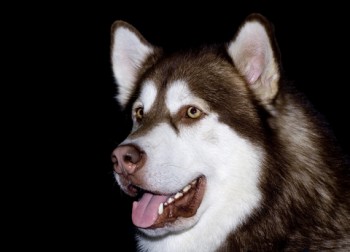 Such a sweet story from Guideposts via the Huffington Post:

Casey wasn’t the most popular dog in her owner Carol Baird’s neighborhood of Dalton, Ga. A huge, burly Alaskan malamute, she had a heart of gold but a nose for trouble.

She’d slip out the Baird family’s back door and trot down the street without a care. Most people gave her a wide berth. That was hardly surprising. From a distance, Casey looked a lot like a wolf.

She behaved like one too, or at least had an appetite like one. Neighbors often stormed over to complain. “Your dog got out again, and ate all of our dog’s food!” or “Casey’s turned over our garbage!”

So when a man rapped on Carol’s door, said he lived three blocks away and then asked for her dog’s name, Carol braced herself. What did Casey do this time?

“We have a sliding-glass door that we usually keep open in the summer,” the man began, “and every day for the last several weeks your dog has wandered off the street and come uninvited into my house.”

That dog, Carol thought. “I’m so sorry,” she said. “I don’t know why Casey gets herself into such mischief. A lot of it’s our fault. We have to start watching her more closely. But honestly, she means no harm…”

“No, you don’t understand,” the man interrupted. “I came over to thank you.”

The man must have seen the confusion on Carol’s face. No neighbor had ever said anything positive about Casey before. They usually wanted to know who would fill up the two-foot hole she’d energetically dug in their backyard.

But not this neighbor. He explained that his father, who had Alzheimer’s, lived with him and his wife and needed constant monitoring. The father rarely moved from his easy chair in front of the TV in the living room and was often agitated. Caring for him had exhausted the man and his wife.

“I couldn’t remember the last time we had two hours to ourselves,” the man said. “And then, one day, your dog showed up.”

Casey wandered into the house through the sliding door and made straight for the man’s father. “She sat right beside him, like she had planned to visit him all along,” the neighbor said, his voice filled with wonder.

He saw his father turn to Casey and begin to pet her. He stroked her and stroked her, and fell peacefully asleep. “He slept two full hours,” the neighbor said. “It was the biggest midday reprieve my wife and I have had in years.”

Casey returned the next day, and every day after that, as if she had an appointment to keep. Each time was the same. She’d pad to the old man’s chair and sit by his side, letting him pet her till he dozed off.

“To my wife and me,” the neighbor said, “Casey was a gift from heaven. That’s why I’ve come to see you today. Is Casey here?”

The big malamute trotted up, looking at the neighbor with searching eyes. The neighbor gave a gentle pat. “You must have known, didn’t you?” the neighbor said to Casey. “That’s why you just stopped coming a couple of days ago.”

“My father died in his sleep the night after Casey’s last visit. She knew her job was over.”