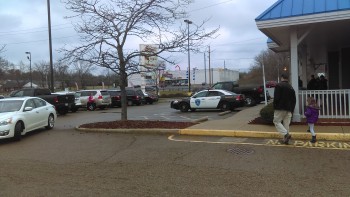 I’ve just returned from the Stark County Veterinary Emergency Clinic, where the lobby is filled with police officers from the city of Canton, Stark County and beyond. From this filled-to-almost-capacity parking lot, you might suspect that the Clinic is over-run with patients, but for the hour that I was there, it seemed there was only one: Canton Police Department’s K-9, Jethro. Jethro is a 3-year old German Shepherd who was shot by a burglar early this morning. Officers have been coming and going throughout the night since the 1:30 am shooting, and the community has responded with food and coffee for the officers, as well as a balloon bouquet from a group of small children.

Canton PD responded to a burglar alarm at a local grocery store at approximately 1:15 this morning. They found someone inside the store, and Jethro did exactly what he was trained to do. It’s very likely that he saved the life of his human partner, Ryan. (And I apologize, I did not get Ryan’s last name – I’ll do that tomorrow when I go back to visit.)

The suspect fled and was later apprehended with a gunshot wound to his leg. His name has not yet been released.

Jethro, meanwhile, was shot four times. Three of the shots went all the way through, but the fourth bullet is lodged near his rib cage. I’m told it will likely not be removed unless it becomes infected. After numerous X-rays, vets have determined that no major organs were hit and no bones were broken. Jethro’s biggest issue at this time is brain swelling. One of the shots hit him in the face, causing significant head trauma.

Canton Fire Department medics picked up Jethro from the scene and took him to the emergency clinic, where he was immediately admitted. Ryan describes Jethro’s eyes as looking as if he were in a cartoon, just spinning wildly, which vets say is an indication of brain swelling. His right eye was bulging, another sign. He was given medication to stop the swelling, and his eyes are starting to return to normal.

He has also been given medication to maintain his blood pressure, which has dipped frequently. However, whenever Ryan goes into the room, Jethro’s blood pressure rises, and he whines, happy to see his partner.

For now, it’s a waiting game. Twelve hours have passed since the shooting, and Jethro is still fighting. Ryan, visibly shaken, maintains a vigil at the vet clinic, where many fellow K-9 handlers and other officers stand in support.

Please say a quick prayer for Jethro and for Ryan and his family.

I’m working on another story for this afternoon about Jethro’s history. He came to the police department in a rather unusual way. I think it will make pretty interesting reading.

2 thoughts on “Update on Canton K-9 Jethro, Shot in the Line of Duty”