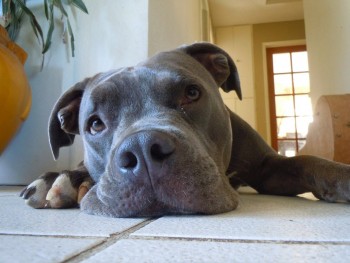 From the Miami Gazette: When Greg Bannerman retired from the Marine Corps, he adopted Brisco to help him with his PTSD. He never dreamed the dog would become a superhero.

On a recent evening, Bannerman, his fiancee, and 6-year old Brisco were watching NetFlix when suddenly Brisco jumped up and ran out of the doggy door. Bannerman followed, thinking someone might be breaking into his shed. He got outside just in time to see Brisco entering the neighbors’ house through their doggy door. He went to the door and knocked several times, but could get no response.

He called 911 and the police broke into the home after hearing screams from inside, fearing the dog might be mauling the family. What they found was even worse! The neighbors (2 adults and 2 young children) were duct taped to kitchen chairs, the father having been stabbed six times. Nearby, Brisco had the three home invaders immobilized on the floor. One criminal even died from his injuries.

Brisco had previously played with the neighbor children and must have recognized their screams for help when he jumped into action.

How’s that for a feel-good story about the world’s most misunderstood breed, the Pit Bull!