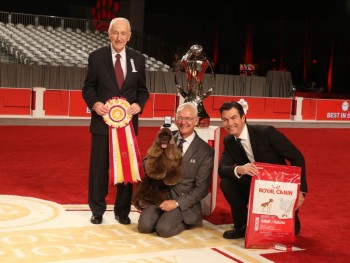 GCHP CH Silverhall Strike Force, an ASCOB Cocker Spaniel known as “Striker” triumphed over nearly 5,000 dogs to earn a $50,000 cash prize, a paw print pendant arrayed in sparking round diamonds from KAY® Jewelers’ “LOVE is a four legged word collection” and the title of Best in Show at the AKC National Championship presented by Royal Canin. “Striker,” owned by Regina Beinhauer & Carolee Douglas of Venetia, Pennsylvania and bred by Wilson S. Pike and Bonnie S. Pike was crowned “National Champion” by Best in Show judge Mr. Roger R. Hartinger after a weekend of intense canine competition.

The AKC National Championship evening live stream is available for replay at live.royalcanin.com alongside on-demand coverage of the Bred-By Exhibitor groups, Junior Showmanship Finals, Best Miscellaneous, Agility and Obedience competitions. The show will be televised on Animal Planet on January 1, 2018 7PM ET/PT with a re-airing at 11PM ET. Check out the photo gallery.

The Rest of the Winners

After winning Best of Breed competitions the following top dogs went on to win in their respective groups and compete for Best in Show:

Other top dogs awarded during the two-day event included the following:

Junior Showmanship
In the Junior Showmanship competition, for handlers from between 9 to 18 years of age, Erin LaPlante with her Doberman Pinscher GCH CH Fayek I’ll Have Another was awarded the coveted title of Best Junior Handler, along with a $2,000 scholarship.

Agility and Obedience Competitions
The 2017 AKC Obedience Classic and the AKC Agility Invitational were held in conjunction with the AKC National Championship. The two events demonstrate the highest level of training and teamwork between dog and handler. Obedience and agility competitions for junior handlers were held for the seventh year, and an AKC Rally® Junior competition was held for the fourth year.

Placing first in their class (Novice, Open, Utility and Masters respectively) were:

Juniors who participated in the AKC Juniors Classic competed in Obedience and/or AKC Rally®.

In Obedience, Juniors competed in the Beginner Novice, Preferred Novice and Preferred Open classes twice, based on their AKC obedience accomplishments.

Placing first in their class were:

Placing first in their class were:

The Championship winners include:

AKC Breeder of the Year
Helyne Medeiros was presented with the 2017 AKC Breeder of the Year Award for Seasyde Pointers at the AKC National Championship on Saturday, December 16, 2017. The annual award honors breeders who have made an impact on their breed and dedicated their lives to improving the health, temperament and quality of purebred dogs.

Sounds like a wonderful time was had by all. Congrats to all the competitors!