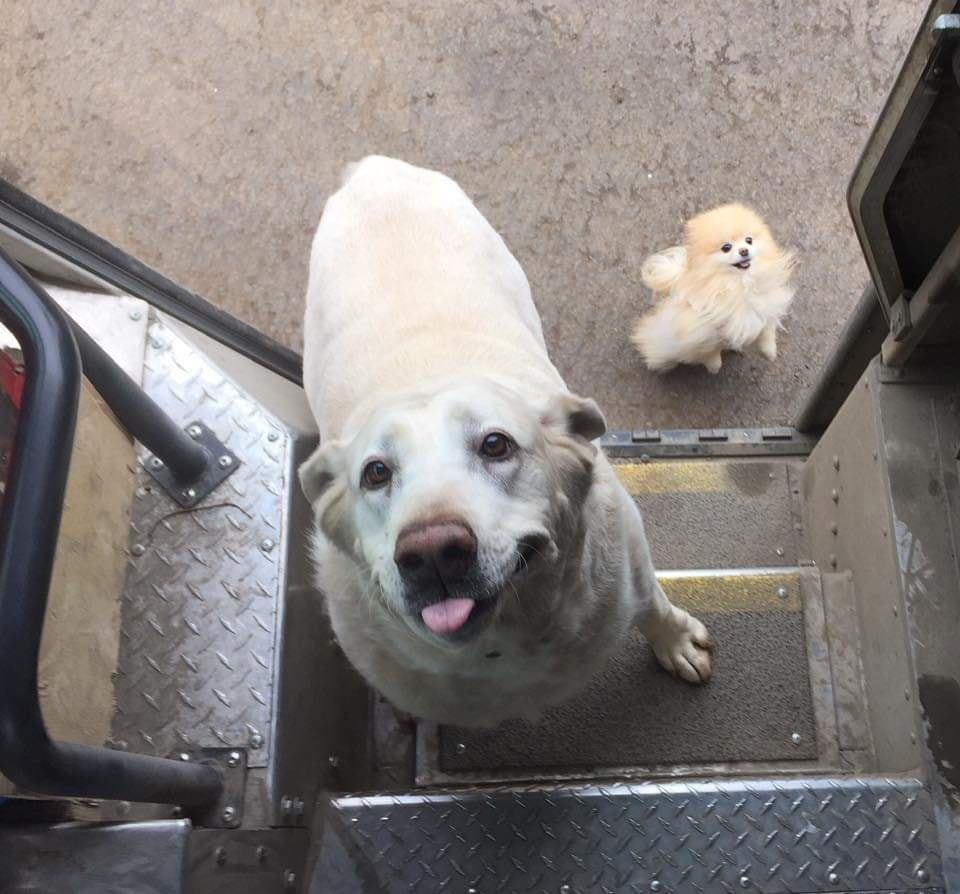 A form of mutually beneficial cooperation by two dissimilar species in nature.
No better example of this phenomenon can be found then the one exhibited here by the Blepping Labrapotamus (Canis Moochus Gianormous) and the Yipping Hippie Mouse (Canis Yappus Underfootus) who utilize skillfully choreographed teamwork for the purpose of extracting far more biscuits together than either one could possibly obtain alone.

To understand their technique we must first understand the strengths and weaknesses of each species. The Blepping Labrapotamus has great speed and size, which she uses to pursue my truck and completely block my exit with her massive derriere until such time as the requisite biscuit toll has been paid. But she sleeps approximately 23 hours a day, and her snoring and flatulence will often drown out the noise of my approaching truck, thus allowing me to make a clean getaway.

This is where the Yipping Hippie Mouse comes in. Although lacking in speed and size, she never sleeps and remains on constant, watchful alert. Her radar-like ears can detect my approach from over two miles away, allowing her to awaken the Blepping Labrapotamus with her shrill, piercing bark. Her long, flowing hair and her talent of dancing on two hind legs enhance her cuteness factor to the point of irresistibility, triggering an automatic biscuit dispensation reflex on my part. And her inability to carry or chew an entire biscuit in her tiny mouth does not hamper her in the least; she simply scurries about and catches the veritable avalanche of crumbs that fall freely from the Blepping Labrapotamus’s massive mouth in much the same way as a remora attaches itself to the underside of shark in order to subsist upon the scraps of meat debris.

Faced with such well-rehearsed teamwork by this devious duo of doggo desperadoes, I am powerless to resist and left with no option but to cede to their relentless demands!

By Scott Hodges in Newberg, Oregon.

I love it! Kudos to the creative UPS man, Scott Hodges