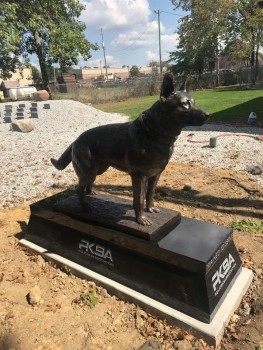 On Wednesday, August 2, 2017 at approximately 0500 hours, the City of Crossville Police Department assisted the Cumberland County Sheriff’s Office, who were attempting to stop a stolen semi-truck, which was traveling down a secluded dirt road off of Genesis Road. With City and County law enforcement in pursuit, the semi-truck wrecked in the woods and the suspect/driver fled on foot.

Fox 8 News in Cleveland is reporting that Canton’s newest K-9 will be ready to roll starting in May. You might recall that Tuko is the dog chosen as the successor to Jethro after the latter was killed in the line of duty. Tuko will graduate from his training this week and start serving and protecting in early May. 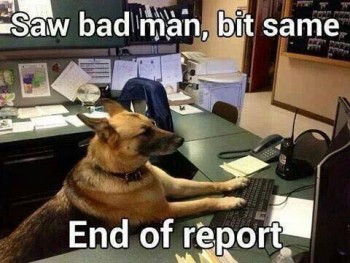 Most cops will tell you the worst part of their job is writing reports. I guess this one wasn’t so hard, though. 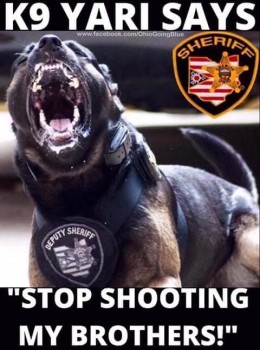 I agree with Yari! Thanks to the Facebook page of Ohio Going Blue for this important public service announcement. 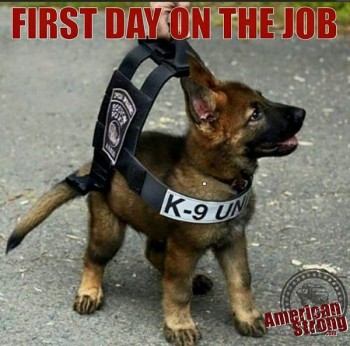 With all of the bad news about K-9s this week, I had to post something to make you smile. 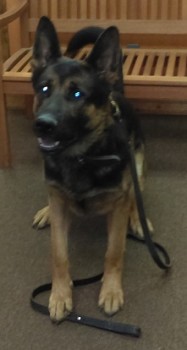 I ran into Jethro and his handler while I was at the car wash yesterday. Jethro is an officer with the Canton (Ohio) Police Department, trained for patrol and for narcotics detection.

He’s very focused, but not really on the camera. His handler was standing behind me with his Kong toy.

Thanks to both of them for their service to the city I call home.

1/9/16 UPDATE: IF YOU’RE LOOKING FOR DETAILS ON JETHRO’S SHOOTING, CLICK ON “BLOG” FROM THE TOP MENU, OR FOLLOW THIS LINK TO THE MAIN BLOG PAGE.

CONTRIBUTE TO THE GO FUND ME CAMPAIGN FOR JETHRO. 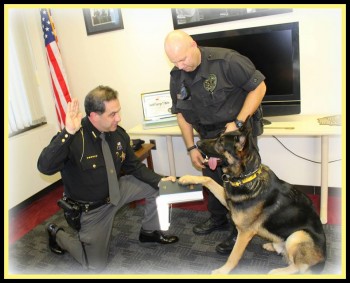 Meet Recon! He is the newest sheriff’s deputy in Stark County, Ohio. The department’s Facebook page says he was sworn in last week and will be used both at the jail and out on patrol.

Thank you for your service, Recon! (And handler Jamie Price.)

Ridgefield, Connecticut said goodbye yesterday to Police K-9 Zeus, who had to be put down due to a degenerative hip disorder. No one has said as much, but I’m assuming hip dysplasia. Before he was euthanized, officers drove him in a squad car to the vet’s office, and the town turned out to say goodbye.
END_OF_DOCUMENT_TOKEN_TO_BE_REPLACED

Poor Barney. He was just doing his job, sniffing out drugs for the Tacoma Police Department, participating in what would become one of the city’s largest drug busts ever. Unfortunately, the Tacoma News Tribune is reporting that he accidentally sniffed some methamphetamine up his nose and has died. The 11-year old black lab had served with the department since 2010.
END_OF_DOCUMENT_TOKEN_TO_BE_REPLACED