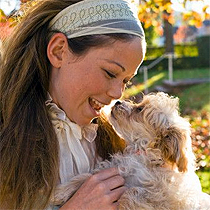 Shannon Proudfoot of Canwest News Service reports that while plenty of people describe their pets as members of the family, a new study shows that for the most devoted dog owners, Fido outranks some two-legged loved ones.

Dog lovers report being as attached to their pooches on a series of standard relationship measures as they are to their mothers, siblings, best friends and significant others, and even closer to them than they are to their fathers. The most striking results came from those most attached to their pets, but even among a general sample of 111 college students living with dogs, people say they crave their dog’s company as much as some human family members.

“College students were saying, ‘I enjoy the physical presence of my dog as much as I enjoy the physical presence of my father and my brothers and sisters,'” says Larry Kurdek, a psychology professor at Wright State University in Dayton, Ohio. “People simply like being around their dogs.”
People tend to bond more closely with dogs than with other pets because of their reputation as loyal and friendly creature.

The study, published in the April issue of the Journal of Social and Personal Relationships, was inspired partly by Kurdek’s personal experience.

A colon cancer diagnosis two years ago necessitated several surgeries and rounds of chemotherapy, and suddenly his cocker spaniel-poodle mixes Gretta and Lilly became an important source of support.

“Although I was always attached to the dogs, there was a dimension of my attachment to them that surfaced during this crisis mode,” he says.

Dogs are most frequently studied for their relationships with humans, he says, because people tend to bond more closely with them than with other pets due to their reputation as loyal and friendly creature who provide unconditional love. However, that hasn’t satisfied the pro-cat lobby.

“If there’s been any consistent comment I’ve had from friends and colleagues, it’s, ‘What about us cat people?'” Kurdek says.

As for why fathers rank relatively low on people’s attachment scales, he chalks it up to stereotypical notions that mothers are nurturing, emotionally expressive and self-sacrificing, while fathers are more emotionally aloof.

“I couldn’t live without them,” Donna Luchak, a devoted owner and humane society volunteer in Calgary, says of her dogs. “They really do give you back unconditional love. When they know they’re looked after and they know they’re loved, they’ll do anything they can to please you.”

Her two dogs – a Tibetan terrier named Skyler and a golden retriever named Schatzie – were both rescues and seem to know they’ve been given a second chance at life, she says. Their enthusiasm when she arrives home at the end of a long day transforms them into four-legged stress relievers, she says.

“They’re members of the family, totally,” Luchak says. “Before we had kids, dogs were our kids.”

Kurdek’s study involved only college students, so he says his next step is looking at dog owners with a wide range of ages and experiences. Conversations at his veterinarian’s office have revealed that middle-aged men often seem hardest hit when a dog has to be euthanized, so he’s particularly interested in examining that demographic’s attachment to their pets.

“This may be one area where men will talk to and share things with their dogs that they won’t with anyone else,” he says.

Kurdek is looking for participants for his new online survey. Interested dog owners can reach him at larry.kurdekwright.edu for more information.

Study participants were asked to rate on a seven-point scale how strongly they agreed with these and other statements about their dogs. The same criteria were applied to relationships with mothers, fathers, siblings, best friends and significant others.